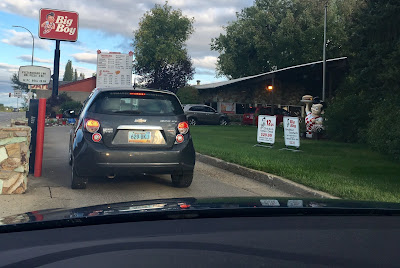 For the second year in a row, I've devoted the entire month of November to blog posts about Big Boy, and I plan on doing so every November for as long as I see fit to keep this blog regularly updated. My reasoning for making November Big Boy Month is the result of Big Boy's expansion strategy which involved selling regional franchises to operators across the country, each of whom added their own name and their own spin to the Big Boy brand. The gradual dissolution of this chain of chains and the decline of the individual regional Big Boy sub-chains makes for a deep well of broken chain stories and experiences to which I can return for many Novembers to come. The discussion of the little differences between different Big Boy operators also serve to break up the monotony of discussing a single brand at length. Menus, logos, and even the Big Boy mascot and burger all have minor variations tied to different regional franchisees, and while most of the variations are insignificant, there are still a few oddities kicking around.

Two completely separate corporate entities use the Big Boy name today. Cincinnati-based Frisch's operates all the Big Boy restaurants in Kentucky, Indiana, and all but two in Ohio, while the Warren, Michigan-based Big Boy Restaurants International, formerly Elias Brothers Big Boy, operates primarily in Michigan, and weirdly also Japan, plus five Bob's Big Boy locations in Southern California, two Big Boys in the Cleveland Ohio area, and a single location in Bismarck, North Dakota. After learning about that single North Dakota location, operating three states away from the next closest Big Boy, I couldn't get it out of my head. Not only was it the only operating Big Boy in the vast Big Boy-less dessert between the Frisch's Big Boys in Indiana and the Bob's Big Boys in California, it was likely the most unique Big Boy in existence, maybe ever.

Harley McDowell opened the Big Boy Drive-Inn in Bismarck in 1954, using the name without the authorization of Wian Enterprises, then parent company of Big Boy. (Harley McDowell's cousin Cleo McDowell of Queens, New York pulled a similar stunt operating a bootleg McDonald's in the late '80s, shortly before his daughter married Prince Akeem of Zamunda, but that's another story.) Harley McDowell's plagiarism resulted in a trademark infringement suit brought by Wian Enterprises, the outcome of which was, for some reason, McDowell becoming an official Big Boy franchisee, changing the name of his restaurant to McDowell's Big Boy, which against all odds, and in the face of the demise of countless other Big Boy operators, is still in business today, under control of Big Boy Restaurants International, and these days going by the name of Bismarck Big Boy.


Stranger still, the Bismarck Big Boy, unlike every other extant Big Boy location I know of, has no indoor seating. Service is through a drive thru pickup window only, and the menu has items that you'll find at few other operating Big Boys including fried chicken and pizza burgers. Upon learning all of this I knew it was only a matter of time until I would have no choice but to visit this isolated oddity in the middle of a mostly empty state no one ever thinks about. It was a few weeks ago, when I could no longer resist the call of the world's strangest Big Boy, and took off across the Upper Midwest, making stops at a bootleg Zantigo and a Maid Rite on the way. I found my way to Bismarck on a Saturday afternoon, and headed straight to Big Boy for an early dinner.


As an early adopter of drive thru service, the entrance to the Bismarck Big Boy's drive thru lane is unconventional and clumsy. I approached the restaurant from the east and found that I had to make a U-turn across three lanes of traffic to enter the drive thru, which connected directly to the main road. It was a more aggressive maneuver than I was used to making for a burger and fries, but one I made nonetheless. It was early in the day, and the dinner rush hadn't hit yet, but I could tell the Bismarck Big Boy was set up for maximum capacity, considering the drive thru had three order speakers, presumably each of which would operate simultaneously to process an three orders at once during peak times. I studied the menu board ahead of me, which seemed impossibly tall. I wanted to sample both the strange menu items as well as the classic Big Boy, and with that in mind, I ordered up a fried chicken breast with gravy and fries, a pizza burger, and a Big Boy, and proceeded toward the triangular canopy that jutted over the drive thru window from the flat roof of the little stone building that housed the kitchen. The short line of cars ahead of me moved quickly, and the employee in the single drive-thru window handed me my order as soon as my payment was processed. I drove onward no more than 50 feet where I found a few parking spots and picnic tables set up in a small park-like area immediately adjacent to the restaurant.


It was early enough in the fall that I could comfortably enjoy an outdoor meal in the heart of the 701 area code, so I parked and selected a picnic table upon which I unloaded the plastic bag containing my order. The pizza burger captured my curiosity first. The single two ounce patty topped with american cheese and slightly spicy marinara sauce was nestled between two slices of white bread which had been grilled in a sandwich press. It was exactly as tasty in practice as those ingredients sound on paper. I would have preferred mozzarella cheese, but all in all, it wasn't bad.

I continued the parade of Big Boy oddities with the chicken. Various regional Big Boy chains have offered fried chicken off and on over the years. Some Big Boy franchisees also owed KFC franchises and sold KFC chicken in their stores in the early days of the KFC brand. The now-defunct Manners Big Boy in the Cleveland area sold Chicken in the Rough, another franchised fried chicken recipe. As an effort to stomp out the outside franchises, Big Boy offered Country Cousin's Chicken, its own brand of fried chicken to its franchisees, but to my knowledge, no Big Boy locations use the Country Cousins Chicken name today. Bismarck Big Boy seems to be the only restaurant using the Big Boy name outside of California that still serves a bone-in fried chicken product. I found the chicken itself to be nicely cooked and reasonably fresh if a little under-seasoned, but a quick dip in the gravy really brought each bite to life. The thick chicken gravy was nicely seasoned to compensate for the lack of seasoning on the chicken, and its peppery flavor served to enhance the flavor of the chicken. After the chicken was gone, I found myself using the gravy on my fries, which were thinner and much crisper, which is to say, objectively better than Michigan Big Boy fries.


The Big Boy itself bore a strong resemblance to its Michigan counterpart with its three piece sesame seed bun, shredded lettuce, single slice of American cheese, and Thousand Island style sauce. The flavor of that sauce was a bit milder, pickley, and dare I say, Big Mac-like than the Thousand Island used at Michigan Big Boy, almost as if their sauce comes from a different supplier, which when you think about it, it's likely to. I also imagine very few people notice given the restaurant's remote location within the Big Boy chain. Regardless, I found it to be a perfectly acceptable burger. After all, Big Boy sauce varies much more wildly than this. Frisch's uses tartar sauce, while Bob's uses a blend of ketchup and relish. Another curiosity on the menu in Bismarck that I didn't get to try is a junior Big Boy with a single patty, which like the chicken and pizza burger, I've never encountered at any other Big Boy.

The Bismarck Big Boy was the turnaround point of my four day 2500 mile roadtrip, and despite its grueling pace, it was a trip I'm glad I made. I had initially planned a trip to California to eat at one or a few of Bob's Big Boy locations for Big Boy month this year, but for a variety of reasons that trip didn't happen. I thought this trip to North Dakota would be the next best thing to a visit to Bob's, the original Big Boy chain, but in retrospect, I'm glad I visited Bismarck instead of Burbank. With its indoor dining, and multiple locations with consistent menus, Bob's Big Boy is sure to lack the charming weirdness of the Bismarck Big Boy born out of plagiarism and litigation. Everything about its existence feels like a fluke, from the lawsuit that inexplicably turned into a franchise agreement to its 65 years of continuous existence serving the literal dozens of residents of The Flickertail State, despite the Big Boy brand having no presence anywhere remotely nearby and the restaurant itself having no indoor seating in a state known for its harsh winters. Weirder still, according to their Facebook page, the Bismarck Big Boy is now offering a mushroom Swiss burger on a Big Boy bun. If they still have it next fall, I may be crazy enough to come back and try it, and you should too. 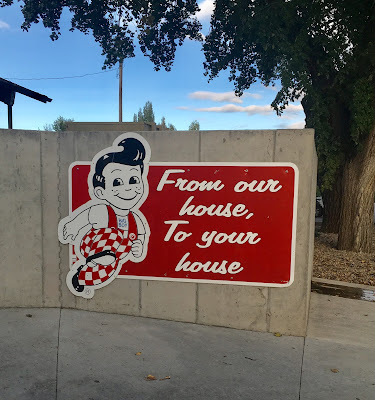 Raxgiving is so close I can taste it. If you'll be anywhere near Harlan, Kentucky on November 29th, consider joining me at Rax for a meal and informal broken chain conversation.