Author's note: I wrote this post in a more innocent time. I made reference to a Z entity, itself a reference to the Q entity from Star Trek: The Next Generation. In the intervening years, the letters Q and Z have become symbols of nefarious political movements, both of which I emphatically condemn. Please understand that the use of letters is not meant as a sign of support for those political movements. My intent was only to reference Star Trek. I wonder how Sesame Street is dealing with this problem. -Zap Actionsdower March 24, 2022. 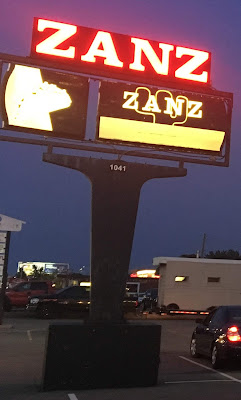 Late last year, I took a tour of a few different locations in Minnesota that fit the Broken Chains theme. The trip resulted in a tiny narrative about the Bonanza in St. Cloud and a full post about the last operating Happy Chef restaurant in Mankato, but the stop I made at a recently re-opened Zantigo in St. Paul was my favorite of the trip, thanks chiefly to Zantigo's connection to a family anecdote I grew up hearing. My meal at the St. Paul Zantigo resulted in a blog post that erroneously assumed that anything remotely resembling Zantigo did not exist after Pepsico's acquisition and phase-out of the brand in the mid-80s, and before the brand's revival in the '90s by former Zantigo Manager Don Kaelble. I even went so far as to lament the "dark Zantigo-less years"of the late '80s and early '90s. I should have known better.

If there's one thing that I've learned in tracking down experiences to write about here, it's that in the chain restaurant world, it's not at all unusual for a franchisee or two of an ostensibly defunct chain to remain in business decades after their corporate parent fades away. Often, those holdout franchisees acquire the rights to the brand, as is the case with chains like Rax and Dog 'n Suds. In other cases, holdout franchisees change the names of their restaurants and menu items, but carry on as they always have. I've visited two different former Burger Chefs that have done just that, and I have a lead on a third. It was therefore not surprising when I learned that Zantigo had never fully disappeared.

After uploading that initial Zantigo post, I continued having my silly adventures and writing sillier narratives about them until I was stopped in my tracks, as if contained by some manner of Roddenberrian forcefield grid. An entity known only as “Z” commented on my Zantigo post and informed me of Zanz, a former Zantigo that had been in continuous operation in Mankato, Minnesota since the early 1970’s, back when Zantigo was called Zapata. Starting in the late '80s the Mankato Zantigo became Zanz after PepsiCo phased out the Zantigo brand, and Zanz had functioned as a Zantigo in all but name ever since. Upon learning this, time seemed to freeze all around me, and could only be unfrozen by a visit to Zanz. At least that's what the Z-Entity told me as it shape-shifted and taunted me. I had little choice but to drive the 700 miles back to Minnesota for the second time in less than a year so I could appease both the Z-Entity and my curiosity about Zanz.

It was after sundown when I arrived, road-weary and hungry. The sun-faded taco on the backlit plastic sign below glowing red letters spelling out ZANZ marked the end of my journey. The name, "Zanz" was different enough from Zantigo to keep the lawyers placated, but similar enough to let the general public know what they could find inside. I walked across the parking lot, under the building's long canopy that hinted to its past life as a drive-in, and into the building's small dining room.

I had my doubts about how authentic of a Zantigo experience I could expect at Zanz, since the building was not a standard example of Zantigo's corporate architecture. It had clearly been converted to a Zapata from something else before it became Zantigo, and finally Zanz. From the outside, the building lacked the stucco walls, arched windows, and tall wedge that made its estranged cousin in St. Paul look the part of an authentic vintage Zantigo building, but once I was inside, those doubts melted away like shredded cheddar in a Chilito. Every flat surface was covered in terra cotta, Spanish tile, woodgrain, or gold formica. Tall, amber-tinted light fixtures hung over every booth, and while the panels in the menu board were modern, they had what I took to be its original frame. It was the vintage Zantigo interior I had hoped for, in vain, in St. Paul. In fact, Zanz seemed to occupy the opposite end of the Zantigo spectrum from its Twin Cities counterpart.


The St. Paul Zantigo, was clearly a purpose-built Zantigo building, but it had been updated extensively, inside and outside to suit a modern aesthetic. The color and decor in St. Paul were decidedly modern, and the old backlit menu board had given way to modern flatscreen monitors. (These updates were likely a necessity, as the St. Paul Zantigo was a Taco Bell for many years before it reverted back to a Zantigo location, and it was likely extensively remodeled during the Taco Bell era.) The interior at Zanz, on the other hand, was a perfectly preserved 1970s time capsule, quite possibly the most complete Zapta/Zantigo interior left in existence. If the St. Paul Zantigo, and the other locations around the Twin Cities are representative of the modern Zantigo brand, Zanz serves as an unofficial reminder of the brand's heritage.


My plan was to compare and contrast the Zantigo and Zanz experiences further by ordering the exact same thing at Zanz as I had at Zantigo. When the cashier nodded me over, I started with the same mild Chilito and chips and cheese I'd had in St. Paul, but panicked slightly when I could not find a Taco Deluxe on the menu. Thinking on my feet, I ordered a taco burrito instead, and took a seat to await my order, and ponder the difference in menu, and the nature of Americanized Mexican food in general.


Multiple sources state that during the modern Zantigo revival era, Don Kaelble and company made a few additions to the Zantigo menu. I suspect the Taco Deluxe, a hard shell taco inside a softshell tortilla with a layer of refried bean adhesive was one of these additions, likely made to compete with the similar Taco Bravo from Taco John's and the recently discontinued Double Decker Taco at Taco Bell. I suspect no such menu item existed in the first wave Zapata/Zantigo era during the 1970s and '80s, and that the addition to the menu was never made at the independently operated Zanz. While I was slightly disappointed not to find a Taco Deluxe on the menu, I was excited to try a Taco Burrito.


Longtime readers know I'm a massive fan of a Mexican fast food chain known as Taco Tico, which, like Zantigo, has Midwestern origins and also like Zantigo, was founded by someone who was not even remotely Mexican. Taco Tico has their own version of a Taco Burrito, that is, a burrito shell stuffed with fast food taco ingredients, known as a Sancho. The abscence of a Taco Deluxe at Zanz afforded me the opportunity to try what I took to be Zantigo's equivalent of the Taco Tico Sancho, apparently a staple of Midwest-Mex cuisine.


I started with the most easily replicable menu item, the chips and cheese, and found like at Zantigo, they consisted of white corn tortilla chips under a layer of shredded cheddar jack, microwaved to form a melty blanket atop the simple, yet delicious appetizer. I then moved onto the Chilito, which had failed to thrill me in St. Paul. It's unofficial counterpart in Mankato, however was more to my taste. Perhaps it was a different tortilla, was a bit more generously filled with the chili-like Chilito sauce, or maybe my previous experience helped me manage my expectations, but at any rate, I enjoyed Zanz bootleg Chilito a bit more than the official Chilito I'd eaten in St. Paul, even if the flavor of the filling was nearly identical.


I then moved onto the Taco Burrito, which I unwrapped to find was little teapot-like, short and stout, compared to the long and slender Sancho at Taco Tico. A couple bites revealed the meat inside to be identical in flavor to the taco meat I'd had in the Deluxe Taco at Zantigo the previous winter, and a generous layer of shredded cheese, lettuce, tomato, and onion, provided a nice contrast to the warm beef. It's clearly a menu item best eaten fresh before homeostasis renders the fillings uniformly lukewarm, but it was delightful, if ephemeral.

Having experienced the extremes of the Zantigo brand, it's tough to say which I enjoyed more. While inarguably similar, the modern Zantigo and the vintage and unofficial Zanz occupy two distinct places in my mind. Zantigo, a brand saved from the brink of obscurity and given new life has all the trappings of a modern fast food chain, yet is distinctively different from both the Taco Bells and Chipotles of the world, clearly a viable competitor in the quick serve Mexican segment, with what I hope is a bright future in the Twin Cities and beyond. Zanz, on the other hand feels like the combination of a beloved local mom and pop, which it essentially is, with a connection to both an endangered brand and a bygone era of fast food. It lacks modernity in every aspect where Zantigo has heaps of it. If Zantigo is a modern fast food chain, then Zanz is the working fast food museum that I love to stumble upon. I'm immensely grateful to the Z-Entity for alerting me to its existence, as I am to everyone who sends me tips about places I should check out. If you're reading this, and have a broken chain location in mind that I've not yet visited. Don't be shy. Comment below, email me, message my Facebook page, or slide into my Instagram DMs. I'd love to hear about your favorite surviving location of an endangered or defunct brand, and maybe even visit it and compare you to a recurring Star Trek character.

Or if you're in the mood to travel to a remote town in Eastern Kentucky on a busy holiday weekend, you can tell me all about your favorite place on November 29th at the Harlan Kentucky Rax, where I'll be hosting Raxgiving 2019. I'll be around to hand out free Broken Chains stickers, along with another surprise or two while we enjoy a meal at my favorite Rax.