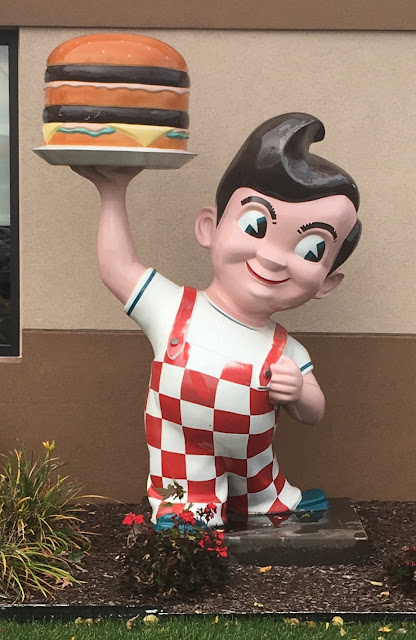 This is a post about the chain, Big Boy, formerly known as Elias Brothers' Big Boy which has locations primarily in Michigan, not to be confused with Frisch's Big Boy, or any other legacy or current Big Boy chains. For more information on the complicated history of Big Boy, see the previous post, Your Chain of Chains, or the Big Boy Wikipedia page.

It was a chilly, rainy evening in the fall of 2010 when I decided to stop going to the Big Boy locations in Michigan that were once owned by Elias Brothers. I was a regular at the now defunct location at the corner of Michigan Avenue and Telegraph road in Dearborn. I met a few friends there for dinner, and ordered myself an open-face hot turkey sandwich. What was brought to my table was an open-face abomination. A slice of bread that was simultaneously rubbery and soggy formed the foundation for layers of soupy instant mashed potatoes, gray TV dinner-grade turkey breast that had been warmed up on the flat top grill, and instant beef gravy whose bovine flavor clashed nauseatingly with the turkey, rendering the whole thing a runny, gamey, inedible mess. I attempted to order a slice of pecan pie to take my mind off of the plate of prison food I had the privilege of paying $9.95 plus tax and tip for, but the waitress whispered that I really didn’t want to order the pecan pie, because the pie had been sitting for “more than a week.” I thanked her for her honesty, paid my bill, and left that Big Boy, never to return.

Not long after this unfortunate meal, I moved to Montana, a state hundreds of miles from the nearest current Big Boy location. (Though the former Big Boy franchisee, JB’s, does still have a restaurant open in Great Falls.) I had all but forgotten about Big Boy when I moved back to Michigan in 2016 to find that the Dearborn Big Boy that had soured me on the entire brand had closed and was sitting empty, along with several other Detroit-area Big Boy locations. I thought that maybe the weakest locations of the chain had been culled, leaving only the best locations open.

I decided to give Big Boy another shot. I stopped at the still open Big Boy in Lincoln Park, Michigan for lunch. The restaurant, likely built in the early 1970’s, was an outparcel of a long-dead shopping center that had been completely razed, except for a 1950s-era Sears store, that despite all odds was still open, and is only now, following the bankruptcy of Sears Holdings, in the process of closing. It was another chilly, rainy day, this time in early spring when I walked into the dated and well-worn dining room. I was shown to a table near the center of the restaurant, after being informed that the seats in the two solariums along the perimeter of the building were closed, I suspect due to either leaky glass seals, or the restaurant’s skeleton crew not wanting to wait on customers seated on the periphery of the dining room. The marquee out front, mounted below a Big Boy statue that once rotated on its platform, mounted on a high pole advertised hot baked potatoes on the salad bar. A potato, a cup of soup, and a salad sounded like the perfect rainy day lunch so I told my waitress that I’d simply have the salad bar.

What greeted me at the salad bar was a selection of wilted greens, potato salad and coleslaw that looked questionable at best, a couple of soups with the consistency of half dried Elmer’s glue, and a glaring absence of baked potatoes. Seeing no point in complaining to what I assumed to be completely checked out restaurant management, choked down what I could, paid my 12 bucks and change, and left, again vowing never to return to a Michigan Big Boy.


Big Boy Restaurants International LLC, the corporate entity that controls the no-name Big Boy locations in Michigan, along with the five surviving Bob’s Big Boy locations in California, plus a few other odd stragglers, seems to be slowly phasing out U.S. operations in favor of expanding in Japan where it operates 279 locations, nearly four times the number of Big Boy International LLC-controlled Big Boys in the US, most of which are painfully outdated. I don’t think I’ve ever been to a Michigan Big Boy that has opened in this century, and most of the Metro Detroit locations seem to be 1970s builds, dating back to the Elias Brothers era. Menus, buildings, and staff all look tired these days. It’s clear that US operations are slowly winding down, not unlike Ponderosa-Bonanza in the past few years. With the long term future of the Michigan Big Boys looking increasingly bleak I decided to give them one last chance, and seek out the best possible Michigan Big Boy experience I could.

Big Boy Restaurants International LLC’s corporate headquarters are located in the Detroit suburb of Warren, Michigan. I figured it would stand to reason that the Big Boy in Big Boy's hometown would be among the best run locations in the chain, so with cautious optimism, I made my way to Warren, Michigan’s Big Boy at the corner of 12 Mile Road and Hoover Road. It was 1:00 on a Sunday afternoon when I first stopped by, and I was a little surprised to find the place packed.

On weekends, Big Boy offers an all you can eat breakfast buffet until 2 PM, and the buffet proved popular at this location for a combination of people I took to be a combination of churchgoers and late risers scrambling to get in the door before the buffet closed. I walked in to find the area around the “Please wait to be seated” sign crowded with around ten people in patient obeyance. I stood around for a few minutes, long enough to note that there was no dedicated hostess and that none of my new hungry comrades were being seated or even acknowledged by the busy staff. I suspected I was there at the busiest possible time, and the only time where an employee whose sole duty is to greet and seat customers, and perhaps take names and offer estimated wait times for tables would make sense, but no one running the place had seen fit to hire such an employee. Not seeing a point in standing around impatiently, I left, and drove to the nearby Kmart, that is surprisingly not yet slated for closure, to kill an hour or so and let the late breakfast crowd at Big Boy die down.

Upon my return the place had emptied out considerably, and I was immediately seated in a booth, where a waitress took my order. All month long, my plan is to order roughly the same thing at every Big Boy and former Big Boy affiliated location I visit, the a Big Boy (or the closest facsimile thereof), fries, and coleslaw. The coleslaw arrived first, it was topped with a generous portion of paprika, and an odd leaf I couldn’t identify that was either a garnish or the result of a mishap in the kitchen. I waited to dig into the slaw. I wanted a picture of it alongside my burger and fries, which arrived a few minutes later on a curious round plastic tray with a paper liner.


This iteration of the Big Boy, prepared as it has been for decades in Michigan Big Boy locations, bears perhaps the most resemblance to its more successful imitator, the Big Mac. Both have sesame seed buns and a Thousand Island-based sauce, The Big Mac simply gained pickles and onions to set it apart, not unlike the way real and most definitely not fictional Queens, New York restaurant owner Cleo McDowell sold a burger known as the Big Mick at his restaurant, McDowell’s, with two all beef patties, special sauce, lettuce, cheese, pickles, onions on a bun with no seeds. McDowell’s existent and not at all a throwaway gag from an ‘80s movie burger was merely a copy of a copy, perhaps even a copy of a copy of a copy since Burger Chef’s own Big Boy imitator, the Big Shef beat the McDonald’s Big Mac to market.

While I’ve recently enjoyed the occasional tartar sauce and pickle-topped Frisch’s Big Boy when driving through Ohio, this was my first Michigan Big Boy in years. I remembered it being akin to a Big Mac in flavor, and while it wasn’t dissimilar, the sauce had a much stronger, and slightly tangier taste with a decidedly savory, almost cinnamony finish. It was better than any Big Mac I’ve ever had, and on par with some of the better Frisch’s Big Boys I’ve enjoyed. It made me fall in love with the Michigan version of Big Boy, descended from the Elias Brothers operation, all over again. I instantly forgave the putrid turkey sandwich in Dearborn and disappointing salad bar in Lincoln Park. I even overlooked the tepid and slightly soggy fries and utterly flavorless coleslaw (which my waitress repeatedly and annoyingly referred to as cold-slaw) that came with my burger. The balance of flavors and textures of the Big Boy, a sandwich served today just as it was 60 years made the annoyances of enduring construction traffic on I-696 and wasting time in Kmart fall away. Despite the hit or miss nature of the Michigan Big Boy experience, and the increasingly anachronistic atmosphere in their restaurants, they still make a pretty good Big Boy. They probably wouldn’t have survived this long if they didn’t.


Admittedly, I entered into the Warren Big Boy biased by abysmal experiences at Big Boys elsewhere in Metro Detroit, but I left in a much better mood, and with a much better opinion of the operation than when I entered thanks to a burger that despite a crowded field of imitators manages to be unique enough and tasty enough to carry a historical but clearly struggling restaurant brand through decades of turmoil. I’ll be back occasionally. It’s only a matter of time before I find myself craving another Elias Brothers-style Big Boy. Posted by Zap Actionsdower at 10:48 PM