In 2018 it’s a given that brick and mortar retail as we knew it in the twentieth century is over. In general, anything I can’t buy in a grocery store, I buy online. I don’t remember the last time I went I to a big box retailer like Wal-Mart or Target and spent more than $10. Just about every non consumable item I buy, including big ticket items like my sofa and lawn mower come from online retailers. In many ways, however, this is nothing new. Online retail is not drastically different from the way many rural Americans shopped in the late nineteenth and early twentieth centuries.

Before widespread use of the internet, mail order catalogs filled the role that online retailers like Amazon do now. Montgomery Ward and Sears Roebuck catalogs were extensive and diverse in the products that they offered for sale by mail order, and offered residents of rural communities an alternative to expense and limited selection associated with small town retail. The success of the mail order business model allowed both companies to expand rapidly during the economically prosperous 1920s.

With its recent acquisition of Whole Foods, and the opening of a handful of Amazon-branded stores, Amazon has begun to expand into brick and mortar retail, mostly in affluent urban areas. Nearly a century ago mail order catalog giants Sears Roebuck and Montgomery Ward did the same, opening physical stores in larger cities catering to a wealthier clientele than they typically reached with catalogs.

Of course Sears still operates many brick and mortar Sears and K Mart stores, but if you follow the news you know the future of both brands is very much in question. If you’ve been inside a Sears or K-Mart lately, you’ll no doubt note as I have, the stench of obsolescence and imminent closure hanging in the air under the sickly green glow of flickering fluorescent lights as you walk the broken tile floors and threadbare industrial carpets. Stores are full of products with almost delightfully dated sounding brands, like Kenmore and DieHard. Having sold off Craftsman tools last year, Sears doesn’t seem to have a lot going for it these days. This isn’t the first time a once mighty retail giant has fallen. The current decline of Sears was foreshadowed nearly twenty years ago in the decline of their longtime competitor Montgomery Ward.

Like Sears, Montgomery Ward expanded from catalogs into brick and mortar retail in 1920s and spread rapidly during those prosperous years. The company was able to weather the depression thanks to restructuring efforts by company president Sewell Avery. Because of his efforts during the lean years, Montgomery Ward returned to profitability in the late 1930s and Sewell Avery was named CEO.


The decline of the brand began after World War II. Incorrectly predicting the economy would decline into depression Avery did not allow the construction of new stores or the renovation of existing stores. This policy was in effect well into the fifties, preventing Montgomery Ward from benefitting from the economic boom and allowing competitors to seize the best real estate for their own stores while existing Montgomery Ward stores deteriorated and became increasingly dated. When New Montgomery Ward stores finally did begin to open in the late fifties, they opened in the remaining available locations which were often inferior to the locations of their competitors.

My real life experience with Montgomery Ward is limited. I remember it as the stodgy looking anchor store in Lexington, Kentucky’s Turfland Mall, smaller and older than the more fashionable Fayette Mall, which had Sears as an anchor store. When Montgomery Ward announced they’d be closing all existing stores and ceasing operations in 2001, no one seemed surprised. Many of my friends’ parents made one last trip to the Turfland Mall store seeking closeout prices on electronics. I assumed, as many people did, that the Montgomery Ward name would die with the closure of the last store.

DMSI, an Iowa based catalogs retailer thought differently and acquired use of the Montgomery Ward name, and to this day operates a Montgomery Ward branded retail website at Wards.com and still distributes paper catalogs. I’ve done extensive window shopping at wards.com and noted that it’s selection is drastically limited compared to Amazon and prices for identical items seem to be higher than Amazon across the board. Aside from novelty, The one benefit of buying from Montgomery Ward over Amazon, is that Montgomery Ward offers in house financing on many of its higher-priced items.

When I found myself in the market for an air fryer, I very much wanted one Montgomery Ward branding from Wards.com even tough Amazon had an identical fryer (without the Montgomery Ward branding) for $60 less. The sheer novelty of buying a brand new Montgomery Ward-branded item from a retailer called Montgomery Ward in 2018 sucked me in, and made me reluctantly overlook the additional expense. I was all set to make the purchase when i noticed they wanted to charge me an additional $47 for shipping, and that finally scared me away. I just couldn’t convince myself to pay over $200 for something I could get on Amazon for just under $120 with shipping included as part of my Prime membership. 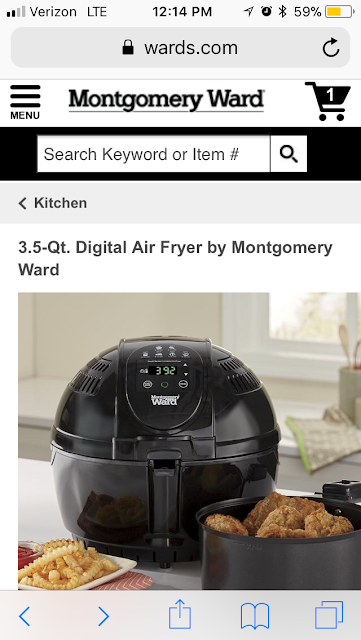 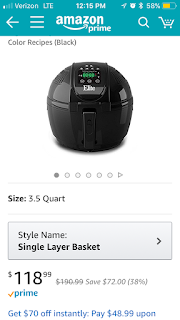 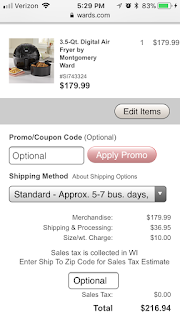 Montgomery Ward’s marketing approach is definitely not aimed at odd millennials like me, who will drive two hours out of their way to eat at Rax Roast Beef just for the novelty of experiencing an endangered brand. I picture the typical Wards.com customer as someone much older than myself who has been a Montgomery Ward customer since the brick and mortar days who doesn’t have the same trust and affinity for Amazon and who definitely don’t have Amazon Prime. At least that’s the best-case scenario.

Given the fact that they offer in house financing and that the purchase price of their products is high compared to other retailers, I suspect the current iteration of Montgomery Ward has positioned itself to cater to customers who can’t get credit cards and who don’t have a lot of cash on hand. Granted I have no idea what interest rates are involved, but even at zero interest, their prices, compared to Amazon’s are much higher, and strike me as predatory. If you make the assumption that a typical Wards.com customer has poor credit and doesn’t have $110 in cash to buy a small appliance from Amazon, a $200 out the door price for the same item financed through Wards.com sounds not dissimilar to the tactics of buy here pay here used car lots. It’s a little sad to see a name with so much history and good will being used to market subprime loans for housewares and small appliances, but a decades-long decline and high profile bankruptcy and liquidation have diminished the brand to its current state.

I guess I’ll go my whole life having never bought anything from Montgomery Ward, and that makes me a little sad. At this point it’s just a name slapped on a completely different retailer anyway. I probably should have just gone to Turfland Mall when I had the chance.
Posted by Zap Actionsdower at 6:03 PM